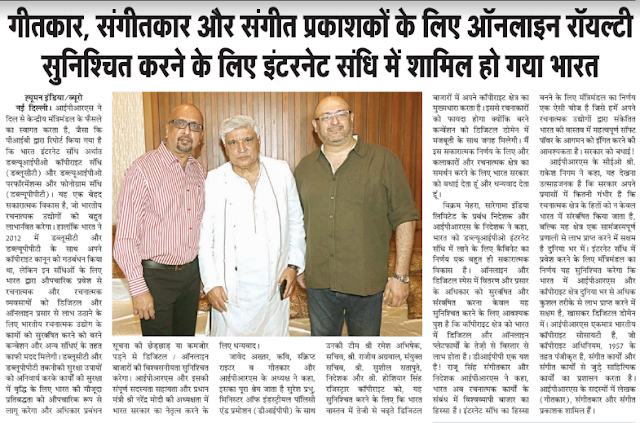 Courtesy : Dainik Human India
Posted by Unknown at 08:17 No comments: 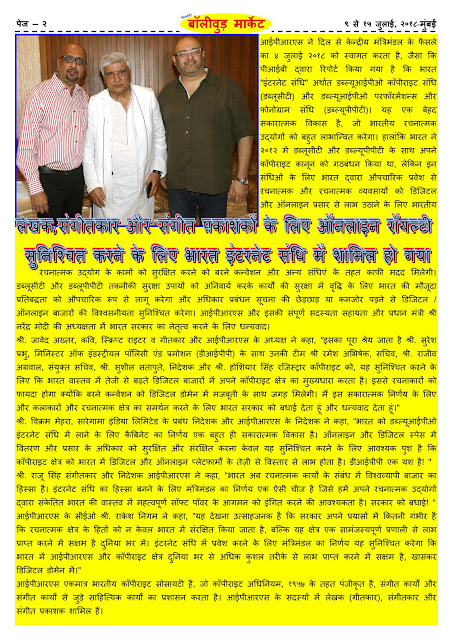 Courtesy : Bollywood Market
Posted by Unknown at 08:13 No comments: 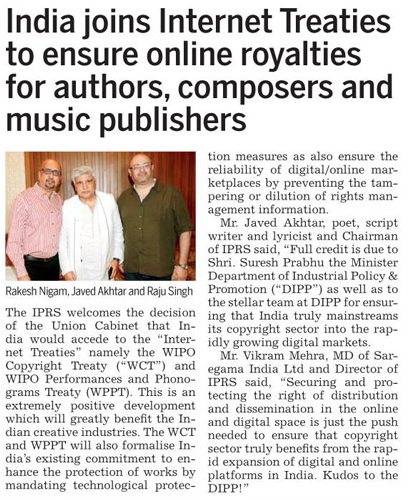 Little Singham to hit the summer out!

With just a few weeks remaining  for the schools to re-open for a new academic year across the country, Discovery Kids is back at it again with a grand surprise for the kids all over! The success that Little Singham IP garnered has given a way to yet another collaboration of Discovery kids  with Rohit Shetty  Picturez and Reliance Animation. A full length Animated feature film is set to hit our TV sets on 2nd of June at  1:30 PM and 5:30 PM.

The film is directed by  Prakash Satam; Series director is Vikram Veturi; Script and the story has been written by Nidhi Anand while the music has been composed by Prakishit Lalwani and Raju Singh. This film adds yet another jewel in the veteran music composer after hit children shows like , "Shiva , Motu Patlu, Gattu Battu, Vir : The Robot Boy, Chacha Bhatija, amongst others!

Little Singham Aur Kaal Ka Maha Jaal is a cinematic brilliance that will take the kids on an adventurous ride throughout!

MUMBAI: In the single largest payout of royalty to composers and song writers, the IPRS (Indian Performance Rights Society) distributed Rs 13 crore among over 2,000 members at a ceremony in Andheri on Monday.
Luminaries from the Hindi filmindustry arrived to receive royalty and cheer the recipients. Shravan of the Nadeem-Shravan duo, Dilip Sen-Sameer Sen, Jatin of the Jatin-Lalit duo, Shibani Kashyap, Sanjeev Darshan, Harmeet, Sudhakar Sharma, A M Turaaz and Prashant Ingole were among those who collected royalty.

This payout follows a prolonged churning over the functioning of IPRS, including a court battle, and change in IPRS’s constitution. Its board was revamped with Javed Akhtar taking over chairmanship. It was he who spearheaded this reform.

Akhtar said, “We changed IPRS constitution, held fresh elections and then conducted a series of meetings with music publishers (companies). It fructified in this goodwill gesture where six firms contributed this amount.” TV synchronization royalty was paid by PPL on behalf of Saregama, Sony Music, Tips, Universal Music, Venus and Aditya Music. It encompasses music utilized after 2012. “The IPRS board is trying to bring other publishers like T Series, Zee Music, Eros and YashRaj Music on board. I am sure they will be convinced on seeing the process has been streamlined,” said composer Raju Singh who is on the board of directors.
“Henceforth the monies will be paid on a log basis, which is the actual number of times a song is used by various segments, including radio stations, TV channels or downloads. Even Apple and Amazon have become members of IPRS so they will pay royalty from songs that users download,” said Singh.
Javed Akhtar spoke about various types of royalty from TV and radio broadcasts, ringtones, TV serials, song downloads as well as streaming. “I am pleased we could do something for these brilliant minds who have created such wonderful music. The happiness on their faces was so gratifying.” The business of IPRS is to issue licences to users of music and collect royalties from them, for and on behalf of its members— authors, composers and publishers of music— and distribute the royalty amongst them after deducting administrative costs.
(Article Courtesy :https://timesofindia.indiatimes.com/entertainment/hindi/bollywood/news/music-composers-lyricists-receive-rs-13-crore-in-largest-royalty-payout/articleshow/63886673.cms )

In a historic move, the Indian Performing Rights Society (IPRS) distributed royalty of around Rs 13 crore among music composers and lyricists.

In a historic move, the Indian Performing Rights Society (IPRS) distributed royalty of around Rs 13 crore among music composers and lyricists. Javed Akhtar, chairman of IPRS, distributed the money received for TV synchronisation among all members who are authors and composers.
Saregama, Sony Music, Tips, Universal Music, Venus and Aditya Music have agreed to pay royalties, while others have still not agreed despite the law saying so.
Raju Singh, Sudhakar Sharma, Shravan Rathod, Harmeet, A. M. Turaaz, Prashant Ingole, Jatin Pandit, Sanjeev Darshan, Dilip Sen-Sameer Sen, Ashish Rego, Shibani Kashyap and many more were seen at the event.
“Rs 10,000 was distributed to authors with 10 or less than 10 pieces of work registered with the IPRS and the balance royalty was distributed equally to the remaining authors / composers, which worked out to Rs 53,000 each. This is called synchronisation royalty, which is only if your songs have been used in other films or ads or TV,” says Javed.
“The laws have changed and people have changed. People need to be paid and the system needs to be corrected.  Now, every three months, composers, writers and publishers will get their royalties. Some music companies have come and paid us Rs 13 crore as a lump sum accrued over the past six years and we have distributed it. Hopefully, other big music companies will also join in,” says the lyricist.

(Article Courtesy: http://www.asianage.com/entertainment/bollywood/250418/composers-lyricists-share-rs-13-crore-bonanza.html)
◀️◀️◀️
Posted by Unknown at 01:18 No comments:

EEMA and IPRS continue debate on persisting copyright law issue
The Event and Entertainment Management Association (EEMA) met with the IPRS board on 29 March 2018 to arrive at some resolution with regard to music copyright laws, a longstanding reason of friction between both parties.
By Yamini Singh | April 02, 2018

For the longest time event companies have been complaining about the cost of music licenses they have to bear to multiple copyright claimants such as IPRS, PPL, ISRA, individual music companies, agencies such as Novex, etc.
Broadly, IPRS license is needed for all events (live performance/ DJ/ recorded music being played) wherein music is used. IPRS covers the copyright license for Musical and Literary works. PPL is needed only for events wherein recorded music is played. PPL covers the use of sound recording. Weddings and related events do not have to obtain music licenses.
Previously the court had ordered IPRS to bring more transparency to the licensing process by way of better documentation, following which it had de-registered itself as a copyright society. It has recently presented the new tariff structure and rates to enable the requested transparency and registered itself as a society again. A fixed, predictable rate structure has just been introduced and is available on the IPRS website. An online payments system has also been introduced. As a rule, no cash payments are permitted by IPRS for their license issuance.
In a latest development members of EEMA met with the IPRS board on 29 March in order to arrive at some resolution to this long and enduring conflict. EEMA was represented by Sabbas Joseph, President-EEMA; Vijay Nair, VP- EEMA; Manuj Aggarwal (Percept Live), Dinesh Kummar (Wizcraft). IPRS was represented by Javed Akhtar (Chairman-IPRS), Rakesh Nigam, Ameet Datta, Mandar Thakur, Devraj Sanyal, Raju Singh, Shirley Singh.
As a way forward, a Joint Committee between IPRS and EEMA has been set up in order to go over each of the points and resolve all issues so that a joint memorandum can be signed before the end of April 2018 covering all fronts ensuring that the event industry and the music industry work together toward common initiatives and goals.The next meeting is scheduled for today.
(Article Courtesy : http://everythingexperiential.businessworld.in/article/EEMA-and-IPRS-continue-debate-on-persisting-copyright-law-issue-/02-04-2018-145112/)
◀️◀️◀️
Posted by Unknown at 00:59 No comments: